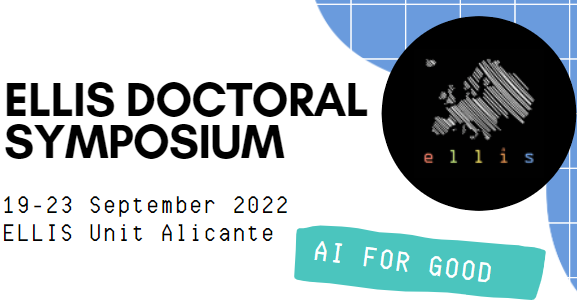 In cooperation with the ELLIS PhD Program, the ELLIS Unit Alicante is organizing the second ELLIS Doctoral Symposium (EDS) from September 19th to 23rd. The focus of the event lies on Artificial Intelligence for Social Good. The Symposium will bring together 180 PhD students, world-renowned experts in Machine Learning such as Nuria Oliver (ELLIS) and Lama Nachman (INTEL), and 18 technology companies. It’s the first ELLIS doctoral conference in Spain.

The inauguration will take place on Monday, September 19th at 3 pm in the auditorium of the Aulario II of the University of Alicante and will be attended by the Rector of the UA, Amparo Navarro; the Vice-President of ELLIS Europe, Nuria Oliver; the General Director for the Advancement of the Digital Society of the Generalitat Valenciana, Juan Ignacio Torregrosa, and the Councilor for Modernization, Innovation and Project Coordination of the City of Alicante, Antonio Peral.

From September 19th to the 23rd, the international symposium will provide a meeting place where young researchers and distinguished scientists may share and advance knowledge in AI for Social Good applied to various fields such as health, climate, or the study of algorithmic biases, for the benefit and progress of all sectors of society.

Thought leaders in AI for Social Good meet in Alicante
On Tuesday, September 20th, a world leader in scientific advancement, Lama Chapman, who led the INTEL team that developed the intelligent interface that would allow physicist Stephen Hawking to communicate through technology, will open the session with a keynote. The list of guest speakers represents the most forward-looking technological thinking: Virginia Dignum (Wallenberg Program on Humanities and Society for AI, Autonomous Systems and Software (WASP-HS) & Umeå University), Emilia Gomez (Joint Research Centre, European Commission & Universitat Pompeu Fabra), Krishna Gummadi (Max Planck Institute for Software Systems), Emmanuel Letouzé (Data-Pop Alliance & Universitat Pompeu Fabra), Christopher Markou (University of Cambridge), John Shawe-Taylor (University College London), Irina Shklovski (University of Copenhagen), and Mihaela van der Schaar (University of Cambridge). That same day, a wide range of technology companies, among which are ICT giants such as INTEL and Bosch, will participate in the job fair. The companies will present students with the professional opportunities that await them in a sector characterized by high demand and employability for its application to all productive sectors.

Nuria Oliver, Vice President of ELLIS Europe and Director of ELLIS Alicante, stated: ”At ELLIS Alicante we study the interaction and impact of Artificial Intelligence on people, since we aspire to develop present and future Artificial Intelligence that focuses on the well-being of Humanity. With this symposium we want to highlight what technology means to people and what researchers can do to make it an engine of positive social change. AI gives us the opportunity to face the great challenges of the XXI century through technological development. Let’s work so that AI is created by and for people; let us contribute to creating a better world.”

The ELLIS Alicante Unit is located in the Science Park of the University of Alicante and maintains a close collaboration with both institutions, as a result of which the University of Alicante gives the use of its auditorium for this event. According to the Rector of the UA and President of the Science Park Foundation, Amparo Navarro Faure, the symposium “is an excellent opportunity to claim the research potential of Alicante in the field of Artificial Intelligence, as well as the relevant role that our university occupies both at the scientific, as well as the knowledge transfer and, of course, educational, levels, which displays and consolidates our position as an essential reservoir of professionals in this field”.

In accordance with the networking spirit that drove the creation of ELLIS in 2018, the ELLIS Doctoral Symposium has multisectoral support from public and private entities, for profit and not-for-profit, among which are ELLIS Europe, the Spanish Ministry of Foreign Affairs, European Union and Cooperation, the Generalitat Valenciana (Regional Ministry of Innovation, Universities, Science and Digital Society), Casa Mediterráneo, the City Council of Alicante, the Banco Sabadell Foundation, the European program ELISE, the University of Alicante and the Alicante Science Park, Bosch, Qualcomm, INTEL and Ângela Impact Economy.

About the ELLIS PhD Program

The ELLIS PhD Program is a key pillar of the ELLIS initiative. It offers outstanding young researchers from all over the world a unique entry point to cutting-edge machine learning research by connecting them to leading scientists across Europe and by offering them a variety of training activities including summer schools and workshops. The ELLIS PhD Program has received funding from the European Union’s Horizon 2020 research and innovation programme under ELISE Grant Agreement No. 951847.

The next round of applications will be opened in October 2022:
https://ellis.eu/news/ellis-phd-program-call-for-applications-2022